Michael Puff presents a printing process combining a Cyan-Magenta-Yellow digital print on watercolor paper with the beautiful, warm tones of palladium for the Black layer. This wonderful process connects today’s digital, color imagery with the unique properties of the nineteenth-century palladium darkroom process.

In this workshop you will print using your color digital images, create and print color separations and digital negatives, and coat, expose, and develop the palladium over layer. You will print the CMY (cyan-yellow-magenta) portion of your images onto a watercolor paper, and then finish the Black layer using palladium in the darkroom with a K (black) separated digital negative.

By the end of the workshop you will have created several prints using this beautiful process. 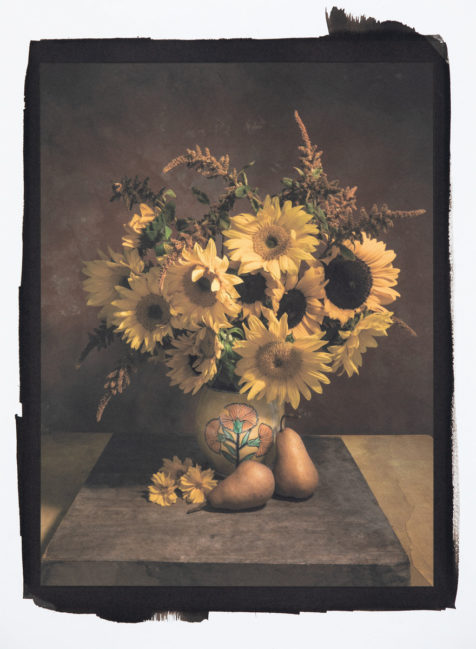 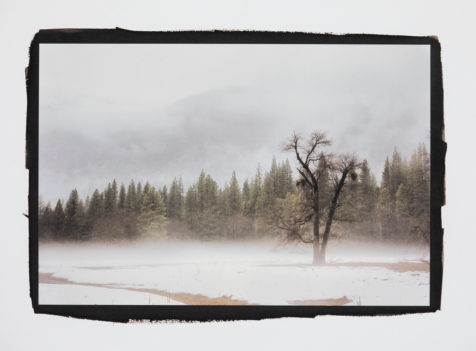 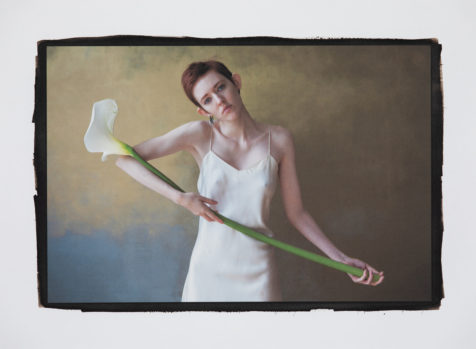 All images by Michael T. Puff

The six artists exhibiting work in the Independent Presence exhibition join us at Art Intersection for an engaging and enlightening discussion about their work and backgrounds, creative processes, and interconnected working relationships through Salon Jane.

For ninety minutes you can engage in an interactive conversation with Robin V. Robinson, Jane Olin, Robin Ward, Martha Casanave, Susan Hyde Greene, and Anna Rheim, and following the Artist Talk, the conversation continues in the galleries for the opening reception of Independent Presence.

David Bayles, co-author of the well-known book Art & Fear: Observations on the Perils (and Rewards) of Artmaking, brings insight to the artists and concept of Independent Presence:

“The artists in this exhibition have found their place by the whole variety of means that artists use to decide who they are, but particularly by extracting themselves from the embrace of two photographic traditions that have become oppressive (West Coast landscape photography and conceptual photography) thereby freeing their intuitions to guide them towards the work they truly need to do.  The resulting work belongs to no school of photography but is rather more sui generis – it generates itself out of intuition, out of perception, out of spiritual emotional and psychological relationships with the subject matter.”

Art Intersection is pleased to present a unique exhibition of traditional and contemporary printmaking. This art form consists of the production of images, usually on paper but occasionally on fabric, parchment, plastic, or other support, by various techniques of multiplication, usually involving a press, under the direct supervision of or by the hand of the artist. Such fine prints are considered original works of art, even though they can exist in multiple copies.

This printmaking exhibition showcases work from three generations of master printmakers, all living and working in the greater Phoenix Metropolitan area, and the work from their studios with three distinctly different visions. The featured printmakers, John Armstrong, Brent Bond, and Jacob Meders, all function as artists, creating their own unique work, and as master printers collaborating with other artists in the production of limited print editions.

John Armstrong, the most senior of the three masters, has collaborated with and printed for many esteemed artists including Philip Curtis, Martin Mull, and Dorothy Fratt. John, along with his wife, Joan Prior, have operated Armstrong-Prior, Inc., a print studio and fine art consulting and brokering establishment for over 30 years. John’s own work, along with the work of artists he has worked with, have been extensively exhibited and collected and are in many prestigious private and public collections including the Phoenix Art Museum and Scottsdale Museum of Contemporary Art.

Brent Bond, a mid-career artist, has exhibited his mixed media work for over two decades. His own publishing company, Santo Press, founded in 2009, focuses on small scale, high quality, limited edition relief prints, monoprints, and monotypes, by regionally and nationally recognized artists like Teresa Villegas, Veronica Villanueva, and Carolina Escobar. Prior to opening his own studio, Brent served as a Master Printer and Studio Manager at Segura Publishing Co., from 2004 – 2013, where he collaborated with many esteemed artists including, Luis Gonzalez Palma, William Wegman, and James Turrell.

Jacob Meders, a member of the Mechoopda Indian Tribe of Chico Rancheria, California, is a recent MFA graduate in printmaking from Arizona State University. His own creative work, along with the work from his print studio, Warbird Press, focuses on issues specific to indigenous cultures, specifically, Native Americans. Jacob has shown recent work at Gallery 31 at the Corcoran, Washington DC, and The Heard Museum in Phoenix, Arizona.

Image “Sound Made by Quail” by Jacob Meders

In the Galleries you will find photographs embedded in brass sculptures, exposed into a plant leaf, printed in a book, and imaged onto a silver mirror; this unique exhibit is The Physical Photograph, and Jerry Spagnoli Contemporary Daguerreotypes and Local Stories. The opening offered the opportunity to visit with many of the exhibiting artists and talk about their work. 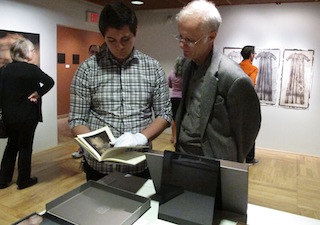 Jeremy Rowe takes interest in a book whose construction and binding was done by Jace Graf.  Mr. Graf will lead a Hard Cover Book and Clamshell workshop at Art Intersection in February. 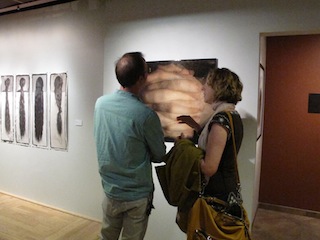 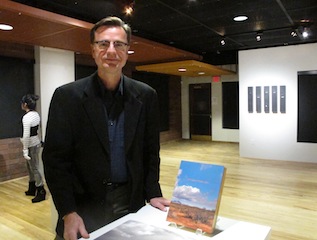 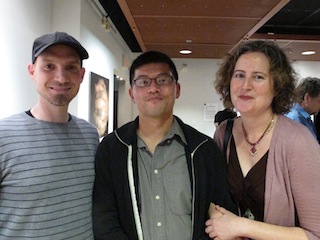 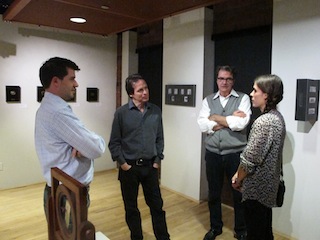 Jerry Spagnoli and Jim Hajicek discuss the wonders of 19th century photography and printing.  Later in the week Mr. Spagnoli gave a lecture at the Phoenix Art Museum sponsored by INFOCUS.