Views from the Reservation

Northlight Gallery continues its focus on Native American life with Views from the Reservation, which features the photographs of John Willis and the ledger drawings of Dwayne Wilcox. Willis’ photo essay documents modern life of the Oglala Lakota on the Pine Ridge Reservation in South Dakota. Wilcox’s drawings use humor and cultural commentary to depict contemporary Lakota everyday life.

“John Willis’ photographs of the Pine Ridge Reservation and Oglala Lakota people who live there represent a mutual trust and authentic intention on his part to honor and share their way of life,” says Northlight Gallery curator Liz Allen. “He has collaborated with and promoted Lakota artists he has met on Pine Ridge, including Dwayne Wilcox.”

Willis’ work spans nearly 20 years and is based on intimate relationships with the Oglala Lakota including sharing in sacred ceremonies of the Sun Dance and the sweat lodge ceremony for cleansing and prayer that the Lakota call inipi. 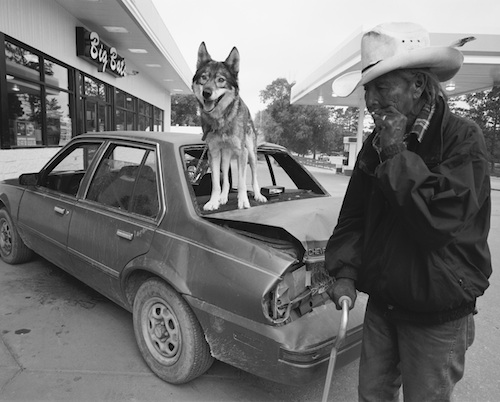 Willis will discuss his work at 6:30 p.m., Oct. 22, at Northlight Gallery in Matthews Hall on the ASU, Tempe campus. The gallery talk and book signing is free and open to the public. The exhibition, which runs October 17 – November 23, consists of a selection from Willis’ book of the same name published by the Center for American Places at Columbia College Chicago in 2010.

“It is important, I believe, that a record be made to chronicle the real life of the modern Lakota, one that neither highlights nor avoids the fact that these still-proud people have become an abjectly poor nation,” Willis writes. “Our need to be reminded of such realities, to consider similar contemporary situations, and to avoid complacency is partial inspiration for my putting this book together.”

Pine Ridge was the site of the Wounded Knee Massacre on Dec. 29, 1890 when more than 150 Lakota men, women and children and 25 soldiers were killed in the last battle of the American Indian Wars.

Willis first visited Lost Dog Creek on Pine Ridge in the summer of 1992, where he met Eugene Reddest, who followed the traditional Lakota spiritual path and was keeper of the c’anupa, the sacred peace pipe. Reddest welcomed Willis, despite a history of betrayal by documentarians whose photographs of traditional ceremonies and Lakota life were used as evidence to outlaw the “barbaric rituals” by the U.S. Government. Reddest believed non-natives occupy their own place on the medicine wheel which, according to Lakota medicine man Black Elk, represented the races of humanity coming together in the Sacred Hoop. Reproductions from the Reddest family album create a context for the artworks by Willis and Wilcox.

All royalties from Willis’ book Views from the Reservation are donated to KILI radio, “the Voice of the Lakota Nation.” Pine Ridge, like many reservations in the U.S., consists of small communities separated by many miles. Their local radio station serves not simply as a way to receive the news of the day, but as a line of communication about life events.

Willis co-founded the Exposures Cross Cultural Youth Photography Program, a cultural exchange for students that “establishes the arts as a common language among youth from diverse communities.” Views from the Reservation features images from the exchange as well as poetry written by its young participants.

Join us on Tuesday, October 22 at 6:30 p.m. for a gallery talk and book signing when Willis will discuss his photographs and the importance of programs like Exposures that are guided by the principle that positive social and economic change rests on a foundation of understanding and respect.

School of Art, Herberger Institute for Design and the Arts