An installation of photographer Chris Colville’s photographs from the series Works of Fire will be on display in Etherton’s in-house pop-up gallery. 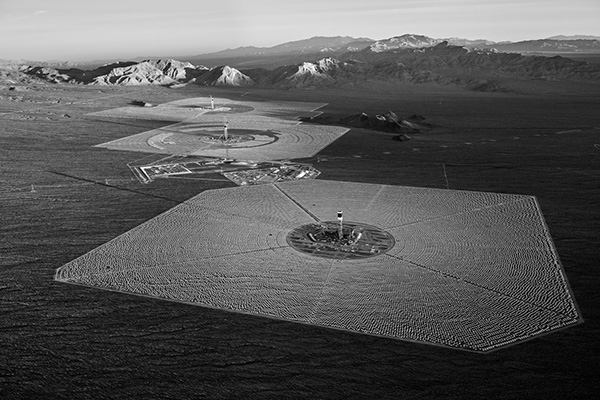 Best known for capturing the construction of the Hoover Dam Bypass Bridge, in his latest project Jamey Stillings has produced epic aerial photographs of the world’s largest solar plant, the Ivanpah Solar Electric Generating System. Sprawling across five square miles of the Mojave Desert, the installation consists of three power plants, each with a 40-story tower surrounded by thousands of mirrors. Stillings’ images evoke the tensions between the massive infrastructure required to implement solar technology on a meaningful scale and the environmental disruption it causes. “From a creative standpoint, I wanted to see if there was a project that could tie in my aesthetic interests with my environmental interests,” Stillings said. Thus began an aerial odyssey that lasted two years and included 16 site visits and 18 flights to record the construction of Ivanpah. With only 15 to 30 minutes to work on each flight, Stillings produced sublime aerial landscapes with magisterial views of Ivanpah that celebrate the triumph of science and the awe-inspiring beauty of the installation as well as the cost of realizing the goal of green energy independence. Not surprisingly photographs from this monumental project have been published widely including in The New York Times, Wired, and The Wall Street Journal. 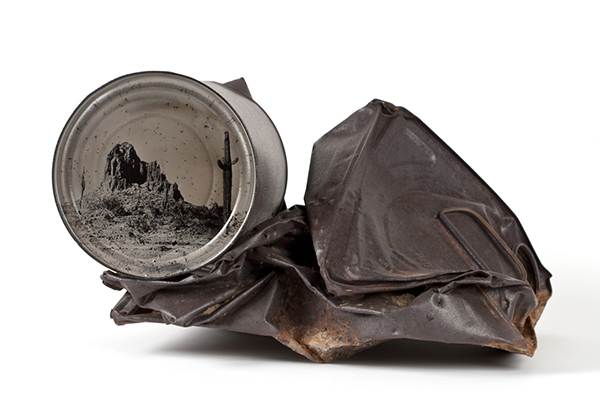 David Emitt Adams revisits the materiality of photography at a time when idealized, nostalgia driven versions of ourselves, courtesy of Instagram’s popular “oldies” filters, circulate endlessly yet may never appear as a print. The object-ness of photo sculptures from the series, Conversations with History, offers a radical alternative to the disappearing images marketed by Snapchat as well as the alternative process movement, which emphasizes craft. Adams’ photo sculptures operate in the conceptual territory pioneered by Robert Heinecken, who challenged the primacy of straight photography beginning in the early 1970s. Adams’ hybrids treat the photograph as both a surface and a sculptural material, and recall Heinecken’s avant-garde photo sculptures as well as the 19th century landscape photography of Timothy O’Sullivan. Made using the wet collodion process on found objects, Adams’ works luxuriate in the tactile. Glossy collodion surfaces brush up against the light sandpapery texture of bent, crushed, or worn, patinated metal. Adams’ photo sculptures evoke a post-apocalyptic present reduced to the scale of a crushed tin can, offering visions of forbidding desert landscapes populated with giant saguaro, empty roads, and abandoned cranes, a stark contrast to contemporary ephemera that idealize the past. David Emitt Adams’ photo objects confound our expectation of the photograph as either a 2-D image or a compressed jpeg and as a talisman for memory. 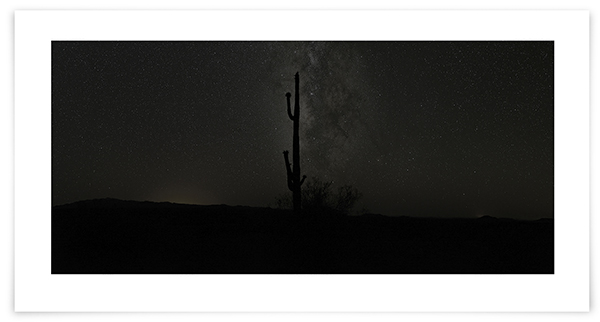 Richard Laugharn’s lyrical images merge science and poetry, expressing a deeply felt sense of belonging. Laugharn’s landscape photographs also suggest a new way of understanding the medium. As he points out today, “landscape photography is often thought of as either a celebration of beauty or a vehicle for… advocacy. While I have benefited from intersections with these paths, my natural tendency has taken me in a somewhat different direction. Since I was a boy, I have turned to nature the way an avid reader returns to a beloved text.” Eschewing overt references to environmental advocacy or border politics, Laugharn has spent the last several years making trips to the Pinacate desert of northwest Sonora, photographing the evolution of individual plants over time, creating a narrative about an unabashed love of place and documenting changes in the wide open spaces of the desert landscape. His photographs include textual references to the plants he visits and name the natural phenomena they witness – from the ascension of Saturn to the mysterious glow of lights from Puerto Peñasco.

Christopher Colville’s photographs from the series, Works of Fire are on display in the Etherton in-house pop-up gallery. Meditations on the duality of creation and destruction, these abstract images of are created by igniting small portions of gunpowder on the surface of gelatin silver paper.