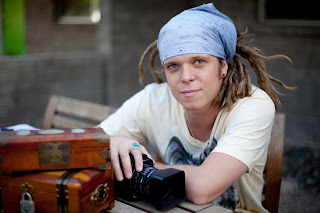 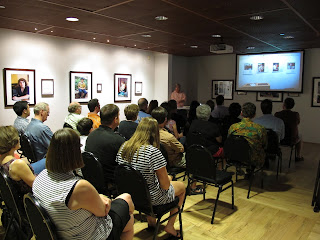 House on Fire, a series of photographs by Robert Ellis, has been on exhibit in one of Art Intersection’s galleries during the months of July and August. The series includes portraits of a cross section of people, both young and old, mostly subjects that Ellis knows. He asks them if he can take their portrait but when he arrives he asks them to participate in an experiment. He gives them three minutes to collect objects (excluding children & pets) that they would carry out of their home in the event of a fire. He then asks them to bring the objects to the sitting while they write about their experience. The actual written response is framed along side the image of the person, giving the written word equality with the photograph.

On Saturday, August 27th, Bob gave a lecture on his work. He opened the talk with slides of his most recent exhibition in Ireland but after only a brief description of his House on Fire project, the talk became more of a discourse about how the project has changed as a result of feedback from his audience and most importantly a reflection on human nature when faced with a life or death situation. It was a lively hour of conversation that left us all thinking about what we would take with us if we were faced with the dilemma:
Your house is on fire and you have three minutes to take what is most meaningful to you.
What would you take?