This exhibition presents an experience of Carol Henry’s unique and beautiful images, painstakingly handcrafted in the darkroom in a style and using processes that make them all editions of one.

This wonderful opportunity to exhibit my unique photography at Art Intersection has been a goal for years. When first introduced to Alan Fitzgerald at an Alternative Photography conference in Santa Fe, New Mexico over 6 years ago, I sensed his passion for light sensitive fine art and looked forward to combining our efforts, which is now on exhibit.

My main body of work that kept me in the darkroom for decades was direct printing on the positive print color paper Cibachrome, later called Ilfochrome. Since the material was sensitive to all ranges of light and had a deep emulsion with a reflective backing, it beckoned me to experiment with translucent objects directly transmitted onto the surface. Once processed in the proper chemistry a single or unique print was the result. I started the process in the early 1980’s and was hooked on working with the medium until Ilford ceased production in 2012. 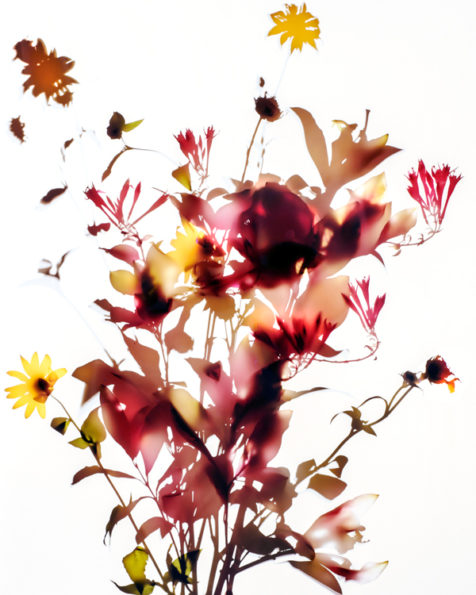 The thing that captivated me was botanical form. I had been raised on a huge property in the Midwest as an only child. I think spending my formative years outdoors engaging with the seasons is what began that obsession with seeing. The Cibachrome gave me the material to share my observations in a unique way and leave an archival record. (Cibachrome is considered the most permanent color photo paper and with UV filtration lasts 200+ years.) Each of my exhibited Cibachrome / Ilfochrome prints is a monoprint or one­‐of­‐kind Florachrome as I call it.

My earliest Cibachrome work was projected through a lens in the darkroom and focused on the paper. Then I began combining projection with photogramming objects directly on the paper. It all began with a found dead bird and took a turn to glass and long strands of kelp. The combined imagery created a sense of depth and narrative that I became intrigued with and spent several years enjoying. In the later years of the paper’s availability and my work I was taken with only photograms, I call those Shadowgraphs. I realized the rich ivory backgrounds that enveloped the color tones, began to appear as infused watercolor washes. I would describe these as shadows in color that we can never see with our own eyes.

After using my last piece of Cibachrome, I decided to continue my explorations with the 175 year-­‐old Cyanotype process. Known as a record of 19th century botany by enthusiast Anna Atkins, it’s a rudimentary concoction of potassium ferricyanide and ferric ammonium citrate. When applied to an absorbent surface and exposed to sunlight a blue resulting image is revealed. I’ve continued the exploration of botanicals and found objects of all shapes and sizes, exposed under the rays of the sun or moon. Inspiration also comes from Man Ray and his rayographs with surreal tendencies. The three life size cyanotype banners refer to the women’s movement of 2018 and were exhibited at the Monterey Museum of Art in conjunction with Year of the Woman where I had a solo cyanotype exhibition in July 2018 titled, Indigo. 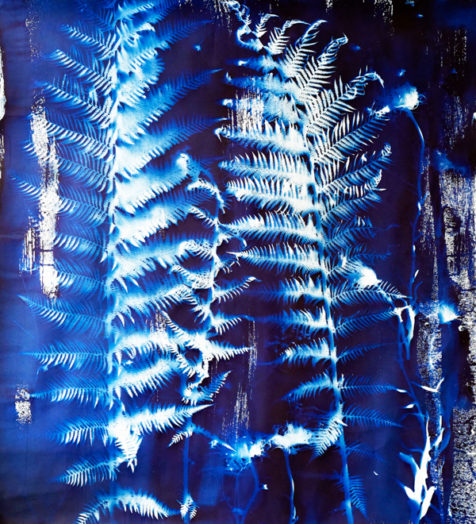 Lastly, I have been creating digital canvases of the unique Cibachromes and painting on the surfaces; with pigment instead of with light this time. An influence has been my partner, painter Rich Brimer and the painting studio and exhibition space we run in Carmel, CA called Carmel Visual Arts.

All unique imagery speaks to the spirit of the maker!