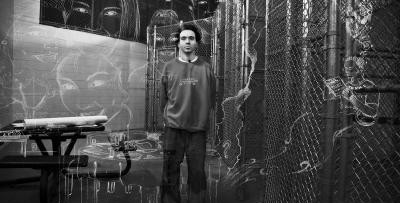 From the Outside In: Sustenance and Time by Jane Lindsay

From the Outside In: Sustenance and Time is a multimedia installation of photographs and video by Jane Lindsay and images from inmates at the Pinal County Sheriff’s Office – Adult Detention Center. Lindsay will transform Northlight Gallery on the Arizona State University’s Tempe campus from February 11 – March 29, 2014 by installing a modified jail cell and a dinner table in the gallery space to create an environment that supports the discussion of complex, conflicting and often emotionally charged issues of safety, justice, civil liberties and social responsibility that urge the viewer to reconsider the roll of the family and civil society as well as definitions of victim and perpetrator.

This is not the first time that Lindsay has worked with inmates or with issues of incarceration, corrections and criminal justice. She has photographed inmates and correctional facilities in her native Texas and Norway to delineate differences within these criminal justice systems. 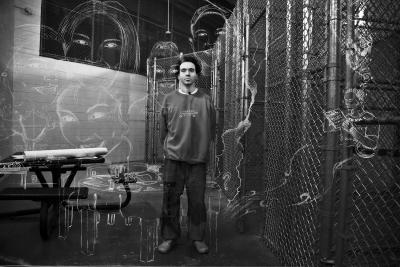 Image David and his Clan by Jane Lindsay

Lindsay worked as a Licensed Professional Counselor for 15 years in Texas. Her clients included victims and people who were on parole and probation, and Lindsay experienced the successes and failures of the system that most U.S. citizens believe has their safety and the integrity of civil society as its paramount goal. Lindsay’s projects highlight rehabilitation through self-actualization involving education, mutual respect and responsibility. As Maslow’s Hierarchy of Needs defined and Lindsay’s clients and the inmates she has worked with over the years demonstrate, a person’s ability to fulfill his/her basic needs of food, shelter and a sense of belonging directly influences their potential. Further, the skills or coping mechanisms someone learns can support positive development toward self-actualization or distort that development.

But it is not only Lindsay’s professional background that motivates her investigation of rehabilitation. She experienced the devastating effects of crime first hand when one of her children was violently assaulted. Her family was faced with the physical, mental and emotional trauma of the attack itself, but also the fear and judgment of their community in addition to the judicial process that purports to hand down justice. Lindsay found the conviction of the assailant gave her no peace or sense of security and failed to address the underlying issues that she believes to be at the core of criminal behavior.

From the Outside In: Sustenance and Time employs the theme of the family meal to represent the sustenance both literally in the form of food and figuratively in the sense of belonging created within the home around the dinner table. The collaboration between Lindsay and the Pinal County Adult Detention Center was initiated by Detention Officer Sandra Price when she contacted Northlight Gallery curator Liz Allen requesting assistance with an art program at the jail. Lindsay developed the program to include approximately 25 inmates, both female and male, who were serving time accused of drug offenses, theft or violent crimes. Sheriff Paul Babeu stated, “A vast majority of our inmates behind bars have the skills and talents needed to succeed in life and pursue their dreams. Unfortunately, because they have committed a crime, their dreams were temporarily put on hold. We want to thank Jane Lindsay and Arizona State University for featuring our inmates’ work in their upcoming show. This show, ‘From the Outside In,’ along with other programs we provide our inmates, allows them to be more marketable in the job force when they return to society. When they are successful in society it greatly reduces their likeliness of reoffending.”

Through her artistic practice that includes direct engagement with inmates, their families and detention officers within a secure facility, Lindsay has found healing and a sense of purpose. Lindsay says, “By involving inmates and their families in self-actualization through creativity, society is directly influenced, the outside world becoming a safer place for everyone. The inclusive nature of the project promotes agency of the prisoners, presenting them not just as subjects, but also as direct contributors to the telling of their story.”

Northlight Gallery hosts From the Outside In: Sustenance and Time as part of PhotoTapas, the statewide celebration of photography in February. Northlight Gallery curator and PhotoTapas founding member Liz Allen says, “This is our third year, and the tapas events have grown to include large institutions like the Center for Creative Photography at U of A in Tucson and alternative art spaces like the Ice House in Phoenix.” The annual event showcases the work of Arizona’s finest photography organizations and photographers as well as the philosophies and processes they employ to create exceptional works of art. Join us for the public reception and discussion with Jane Lindsay on Tuesday, February 11 from 6:00 – 8:30 p.m.