Join us for an artist lecture with Michael T. Puff on Friday, October 28 from 6:30 – 8pm. Michael will discuss his artwork and creative process, as well as the luminous platinum/palladium printing process he uses, which dates back to the 19th century. This lecture is free and open to the public.

If you are interested in learning the gorgeous printing process Michael uses, sign up for our Platinum/Palladium workshop taught by Michael the following Saturday, October 29 from 10am – 4pm. Find out more and register here. This lecture and workshop accompany a solo exhibition of Puff’s work in Ryan Gallery.

About Michael T. Puff
Michael T. Puff lives and works in the San Francisco Bay Area. He’s been a visual artist since early childhood, working as a painter and sculptor. During his years in higher education studying Theater Arts and Egyptian Archaeology, Puff worked as a theater set designer and received many awards for his work from San Francisco Bay Theater Critics. Today he works as a systems computer programmer at Stanford University and builds miniatures, while also pursuing his passion of fine art photography.

Puff began photographing in 2004 and later, under the guidance of master printer Mark I. Nelson, learned the platinum/palladium printing method he uses in his current work. Puff uses modern digital image capture with the extremely permanent and hand-crafted platinum and palladium printing process, merging the contemporary with the historical to produce unique and captivating images. The time-staking printing process he uses, which incorporates platinum and palladium metals into the chemistry, allows for a unique image with a beautiful color and tonal range.

Puff’s love for the theater is evident in much of his work, as he photographs on stage-like sets, often using dancers and actors as models, with images that could function as small moments from a larger narrative. A surreal theme runs through much of his work, as he uses his strong digital editing skills to manipulate scale and mood creating complex otherworldly images. 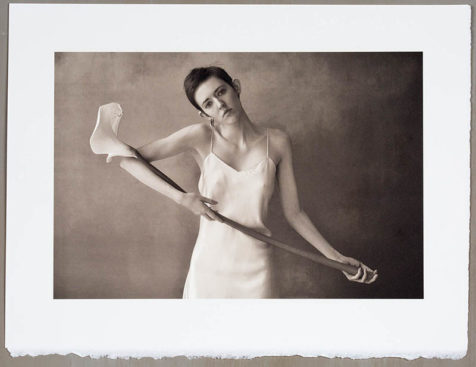 An image that will be featured in Michael T. Puff’s solo exhibition in Ryan Gallery.